Rommel's army had crushed the defenses in Kasserine Pass. "Gore Force", a British company of infantry, ten tanks, some six-pounder AT guns, and a battery of artillery, had been sent forward as a reserve unit but as they arrived all the traffic was westward as Americans and Frenchmen scrambled to get away from Kasserine. Gore ignored them and dug in on the northern edge of the pass. As the Germans blew through the tattered American units, the focus of the attack shifted to Gore’s men. The first up were Major Beilby’s old, slow Valentines of the 2nd Lothians, sent forward with a few American gun-mounted half-tracks. . .
Attacker: German / Italian (Gruppe Stotten, Panzer Division 10 / Centauro Division)
Defender: British / American (Gore Force / 2nd Lothians and 805th Tank Destroyer Battalion / Company I, 13th Armored Regiment) 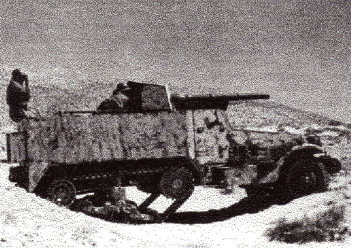