Scenario and VASL map available for free on Lone Canuck website . . .Guderian’s push to the coast with XIX Panzerkorps was sealing off escape routes for the Allied Forces in northern France and Belgium. The capture of Calais was therefore a high priority and the goal of the 1.Panzerdivision. Among the Allied units deployed to stop the Germans was mix of miscellaneous forces such as the 5th Searchlight Brigade, and the 3rd Battalion, Royal Tank Regiment – whose tanks had only just been unload off a ship in Calais that morning – rushed forward attempting to block the 1.Panzerdivision’s attempt to cross the Calais-St.Omer road near the village of Les Attaques. The 1.Panzer-division’s leading units not waiting to regroup, attacked with whatever truck-borne and motorcycle troops and light panzers it had at hand; hoping that reinforcements and more importantly supplies and ammunition would soon follow up. Despite being heavily outgunned and generally lacking air support, many of these scratch Allied forces put a stiff fight; using Bren guns, rifles, mortars, and anti-tank rifles, as well as a bus and a 3-ton lorry set up as barricades, the 1st Search-light Regiment with tenacity of a bulldog, held up the German panzer for three hours at the village before being forced to surrender. After heavy fighting around Les Attaques, the route was open for the advance on Calais. The Citadel fell on 26 May, after heavy air and artillery bombard-ments and several assaults by ground forces.
Attacker: German (1.Infanterieregiment, and the Panzerregiment, 1.Panzerdivision)
Defender: British (1st Searchlight Reg, 5th Searchlight Brigade, supported by 3rd Battalion, Royal Tank Regiment, B.E.F.) 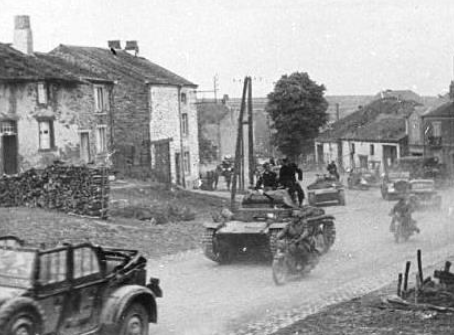