The Green Hell of Inor

Published by: Le Franc Tireur. August 2021
(Log in to add this module to your collection
or to see your play details)

“The Green Hell of Inor” is LFT’s attempt at bringing 2 weeks of epic fighting that took place in the Ardennes Forest during the very first days of Fall Gelb, the invasion of France.
Designed by Lionel Colin and Xavier Vitry, with the help of scholars in the field of French and German military history, and the international team that is Le Franc Tireur, “The Green Hell of Inor” contains everything you need to play [EXC : the metric half-ton of ASL material that you always need] including two counter sheets with French Foreign Legion, Colonial infantry, early war German machine guns and several other new counters.

Also included are a historical map, a rules booklet (supplemented with an historical booklet with images of the town “Then & Now”, enhanced with a battlefield tour and several other articles about the battle of Inor and the 1940 French Campaign) and 16 historical scenarios.
In addition, three CGs are offered, with several new and easy to understand rules that will allow the players to place interdictory fire with their artillery, or use counter battery fire against enemy guns !

This module provides counters to represent various troops that are not depicted in the core modules.
As the French, you will get (all of them with specific counters) :

Senegalese Tirailleurs
Algerian Tirailleurs
Colonial troops
Corps-Francs units
Foreign Legion (including sappers !)
Full-color AFV that fought this battle (with camouflage pattern)
Leaders never seen before (and probably, thereafter !)
The German uses regular MMP counters, but we have provided early-war MG. You will want to read one of the 32 designer’s notes to get the explanation. 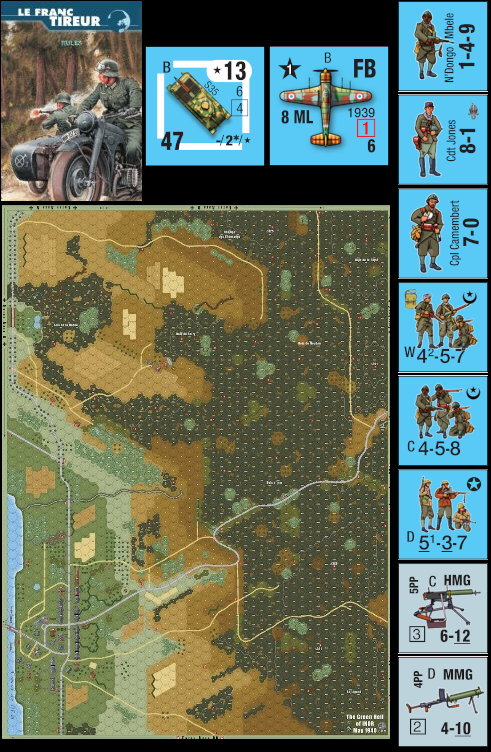