At 1530 hours, Colonel Robert Howze, commander of CCR, ordered yet another attack towards the crossroads. No real gain was expected, but the attack was justified for its harassment value. At that moment, the 116th Panzer Division was engaged along more than ten kilometers of its frontage, and thus was quite dispersed. Captain Mize had inadequate forces available for this new assault. Furthermore, visibility had improved. The American force was engaged immediately when it came into view.
Attacker: American (Task Force Mize, 3rd Armored Division)
Defender: German (Kampfgruppe Bayer, 116th Panzer Division) 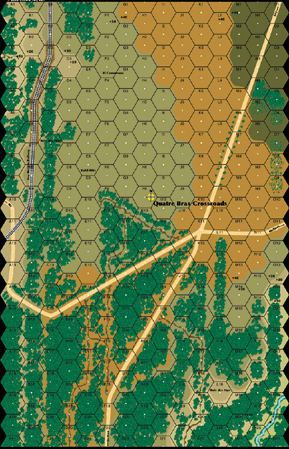