Captain Miller and his task force were scouring the countryside, looking for Private Ryan. They came across a German MG nest that was guarding a bombed-out radar installation. Instead of getting Private Jackson to pick off the MG crew from 100 yards away with his sniper rifle or bypassing the strongpoint, Miller orders the group to charge up the hill and take out the position. (For when you only have 15 minutes but really want to get a scenario in. It's also good for best two-of-three or three-of-five playings)
Attacker: American (No more details)
Defender: German (No more details) 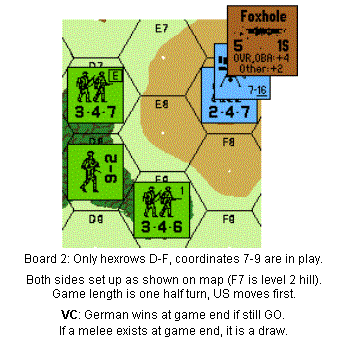