Continuing the attack that had begun at Christmas between Fot and Csomor, Soviet infantry supported by tanks stormed across the fields towards the Hungarian lines. The Hungarian 18/I Battalion took up new positions alongside the detached houses of Rakosszentmihaly but by evening had been practically annihilated near the local church, although the Soviets also suffered significant losses. A group of Soviet soldiers who had advanced as far as the church were encircled as a result if a German and Hungarian counterattack. The group successfully broke out only after asking their own artillery to fire at them, continuously adjusting the direction of the fire as the battle progressed. Captain Nikolai Nkolaichuk was awarded the Hero of the Soviet Union medal for organizing this defense.
Attacker: Hungarian / German (No more details)
Defender: Russian (No more details) 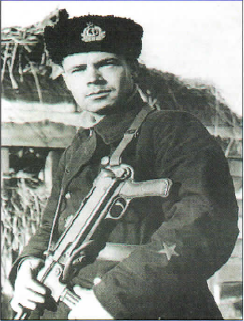