The 329th and 331st Regiment attacked on the west side of the Taute River in a southwest direction. The Americans significantly outnumbered the defenders in infantry, tanks and artillery. The 329th ran into positions of the SS Panzer Division 2, none of which were inside the carpet bombing area. The 2nd SS was reinforced with three batteries of 88mm AT guns from Army Artillery PaK Battalions 1041. The PanzerGrenadiers defended tenaciously from dug-in positions and sunken roads while antitank guns hammered the attacking US tanks.
Attacker: American (Elements of 329th Infantry Regiment, 83rd Infantry Division)
Defender: German (SS) (Elements of SS Panzer Division 2) 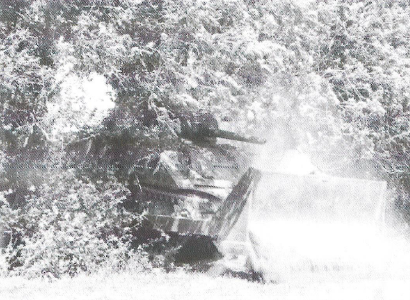