The second day of the battle of the Bulge was underway with the Germans anxious to seize bridges across the Our River. The town of Ouren had two such bridges, defended by a mélange of tank destroyer units, infantry, and artillery. Late in the morning sun, the men of the 112th had finished eating the French toast and bacon the cooks had left behind when a column of panzers and halftrack support drove down the road towards Ouren, intent on crossing the Our.
Attacker: German (Panzer-Division 116)
Defender: American (811th Tank Destroyer Battalion and 112th Infantry Regiment) 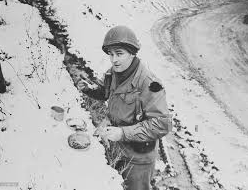 Can't a man finish his breakfast?