The German invasion of Poland was underway. The German assault did not just consist of armored spearheads and infantry and swarms of airplanes denoting the typical blitzkrieg operation. In many secondary areas only border guards and garrison troops tentatively advanced across the border to hold the Polish units in place to allow for other units to advance against weaker opposition. In the area of Lexno, the 71st Armored Battalion equipped with obsolete equipment tussled with the 2nd line German troops including a number of Fifth Columnists. The 2nd Platoon of armored cars and a company from the III/55th Battalion beat back the aggressors and pushed into Germany chasing the retreating Germans, accomplishing the first invasion of Germany in World War 2.
Attacker: German (Frontier Guard Garrison)
Defender: Polish (III/71st Armored Battalion) 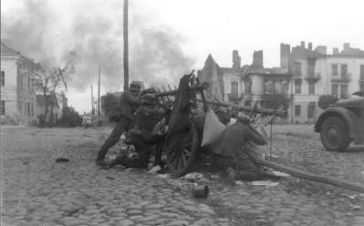