The German blitzkrieg quickly sliced through the border defenses and into the Russian heartland. Reserve units had to throw up whatever sort of defense they could in an effort to slow down the German onslaught. The 20th tank Division, commanded by Colonel Katukov, was one of these units. Poorly equipped with BT-5 and even older BT-2 tanks, known to Soviet troops as sparrow shooters or knights in plywood, this unit was not prepared for the battle to come. Reports came in of an endless stream of vehicles from the German 13th Panzer Division heading into the 20th tank Division's sector. Units of the Divisional Artillery were rushed in to block the main roads, and fired over open sights at the lead recon elements, scattering the motorcycle infantry and thin-skinned armored cars. Meanwhile, the armored core of both divisions was heading towards the battle area.
Attacker: German (Elements 13th Panzer Division)
Defender: Russian (Elements 20th Tank Division) 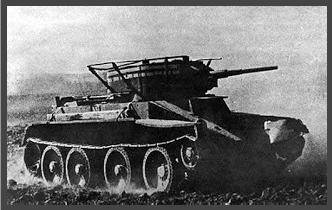