Published by: tacticalwargamer.com
(Log in to add this module to your collection
or to see your play details)

Scenario Designer's Handbook (ISBN 978-0-9782646-8-0) is intended as a reference for those interested in designing historical scenarios for the Advanced Squad Leader game system. The book features 216 full-colour pages with a variety of information to assist in force and terrain selection, including company, battalion and divisional break-downs of the major armies that participated in the Second World War. Additional chapters deal with scenario lay-out, publishing, researching, walk-throughs of the design process and discussion regarding the various components of ASL scenarios.

All are company-level recreations of tactical combat in the Second World War consistent with the ASL series of games.

Scenario Designer's Handbook is not an official publication of Multi-Man Publishing or Hasbro and neither the author nor canadiansoldiers.com/tacticalwargamer.com are in any way affiliated with MMP. 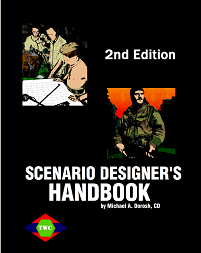