Advanced Squad Leader Starter Kit Expansion Pack #1 2nd Edition is an updated version of the original SKEP #1. SKEP #1 2nd Edition includes the three boards (q, r, and s) and eight scenarios (S44-S51) from the 2011 release. In addition, it now includes board p and the three scenarios from the Beyond the Beaches ASL Starter Kit Bonus Pack (S41-S43) and one from Special Ops #6 (S59). Several of these scenarios have been updated for errata and balance. The original eight scenarios include actions pitting the Poles against the Slovakian army, Russians advancing against Germans, Americans in their struggle against the Italians, and the Free French forces defending against a sudden German counterattack. The four additional scenarios all feature actions between American and German forces in Normandy. SKEP #1 2nd Edition also includes a half-sheet of counters, two Quick Reference Data Cards, one Hedges Example of Play/ASLSK sequence of Play card, one Vehicle and Ordnance Historical Notes book, and one rulebook.

Starter Kit Expansion Pack #1 2nd Edition is not a standalone product and requires ownership of ASL Starter Kits #1, #2, and #3 to play all the scenarios herein.

Fight your way across the tactical battlefields of World War 2 using the men and equipment available historically. Only this time you can determine the outcome! 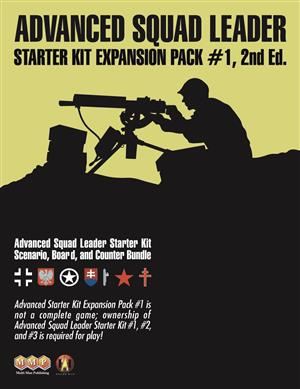