The Minsk-Moscow Highway, Belorussia, 23 June 1944:
The 16th Guards Rifle Division was one of three heavily reinforced infantry divisions that were to create holes in the German lines and allow tank forces of the 2nd Guards Tank Corps of the 5th Tank Army to make rapid and deep penetrations along the Moscow-Minsk Highway. The zone of the 16th was south of the highway, and along the Smolensk-Minsk Railroad. They were reinforced with the following units: 148th Tank Regiment (PT mineroller tanks), 63rd Guards Heavy Tank Regiment (KVs), 517th Tank Regiment (FT tanks), elements of several Self-Propelled Artillery Regiments, 2nd Guards Assault Engineer-Sapper Brigade, as well as numerous towed artillery units. The Soviet forces trained as a combined arms team prior to the attack, and were well prepared. In most sectors of Army Group Center, the Germans had relatively thin lines, and most armor and heavy artillery was stripped to defend expected areas of attack. The area of the highway had seen much heavy fighting in the winter of 1943-44, and the Germans expected an attack to come in this direction. When German intelligence detected the buildup of artillery and armored forces, as well as the movement of ammunition, their reaction was to ensure forces in this area retained significant combat strength. The 78th Sturm Division, already the most powerful infantry division in Army Group Center, maintained its structure which included the 189th Assault Gun Battalion (StuG), a Heavy Tank Destroyer Battalion (PzJgIII/IVs), 5th Nebelwerfer Battalion (120mm Mortars), and Army Antiaircraft Battalion 293 (mix of 88s/20s). These forces defended from probably the most dense network of mines, trenches, and bunkers in Army Group Center, including special rotating bunkers housing machine-guns.

Years of extensive on-sight research along with vigorous play testing by the veteran game designers at Heat of Battle brings you ONSLAUGHT TO ORSHA. 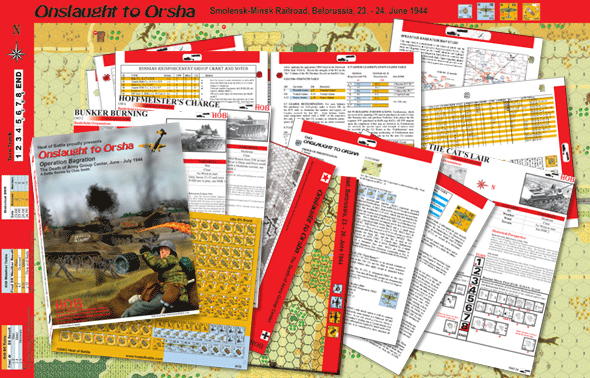 This publication has been rated: 10/10 by 1 users. Write a review