Waffen-SS II: The Fuhrer's Firemen includes 8 scenarios played on geomorphic map boards. Also included with this pack is a set of 240 mounted counters printed in the black of the SS. These counters round out the "No Quarter, No Glory!" pack by including Early War, Second Line, and Conscript SS counters. Also included is a special set of white SMC POW's, black CE/BU Turret counters with Panther and Tiger artwork, and Red Berserk counters for every MMC counter type [EXC:Japanese].

Also included was a Chapter H page containing the necessary rules and notes for a rare set of vehicles found near the Reichstag and others found near Hitler's bunker. 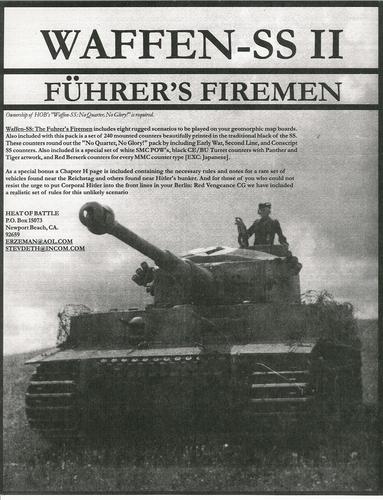