By this time in the war, thousands of Soviet troops were already fighting in Berlin, where the remnants of the German Armies were in their final days. Among many other units, the 11th tank Corps prepared itself to continue its drive toward the Reichstag. Its earlier probes of the Spittelmarkt by tank and assault engineers demonstrated that they needed to take this critical road junction or find a way to bypass the German defenders. Experiencing severe casualties in house to house fighting, the Soviet command issued orders to create light storm groups to better organize and execute armored operations in Berlin. After several unsuccessful probing attacks of the Spittelmarkt, the 11th Tank Corps would launch another attack of the new storm groups.
Attacker: Russian (Elements of 11th Tank Corps, 65th Tank Brigade and 12th Mechanized Brigade and reinforcing elements of the 64th Guards Tank Brigade)
Defender: German (SS) (11.SS-Panzer-Grenadier-Division "Nordland", SS-Panzer-Abteilung 11 "Herman von Salza", and SS-Panzer-Grenadier-Regiment 23 "Norge" and reinforcing Volkssturm elements) 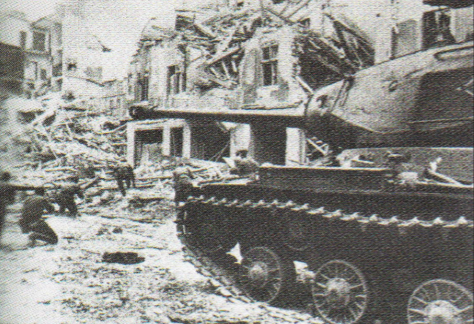