One of the initial Soviet objectives of Operation Bagration was to encircle German forces in the Vitebsk area. After three days of fighting, the 3rd Belorussian Front had advanced to a depth of 30-50 kilometers, splitting the German Orsha and Vitebsk Groupings. Meanwhile, the 1st Baltic Front succeeded in crossing the Dvina River, and in conjunction with the 3rd Belorussian Front encircled the German LIII Corps around Vitebsk. During this time Vitebsk had been designated a Fester Plazt, and no German forces were allowed to withdraw. When finally given the order to withdraw it was too late: LIII Corps was effectively surrounded. Elements of the 206th and 246th Infantry Divisions, and 4th and 6th Luftwaffe Field Divisions were caught in the trap. Although allowed an attempt to break the encirclement, one division was ordered to remain behind and fight. This task fell to the Prussian 206th Infantry Division.
Attacker: Russian (Reinforced elements of 155th Fortified Region. 43rd Army, 1st Baltic Front)
Defender: German (Elements of Infantry Division 206) 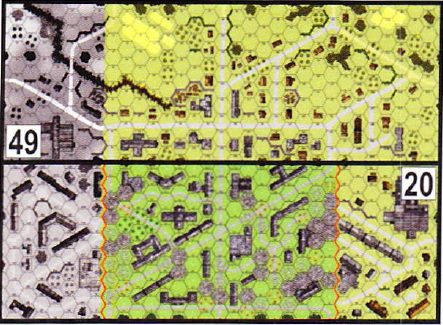