As D-Day progressed, the German counterattacks in Benouville grew fiercer and fiercer, but life for the defenders of the canal bridge was dangerous for one main reason – sniper fire. Unable to move about freely, something had to be done to reduce the German fire. The paratroopers deduced that the steeple of the Le Port church was the most logical source for the sniper fire, so they dispatched several platoons to clean out the church and the surrounding area.
Attacker: British (7th Battalion, 5th Regiment, 6th Airborne Division)
Defender: German (Panzerpionier Kompanie 1, Infanterie Division 716) 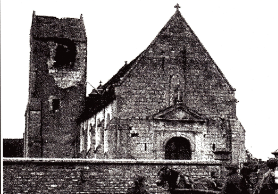