At a meeting of senior officers of the 4th Army on 10 June it was stated that neither the District command nor the High Command in Moscow' thought that the Germans intended to break the 1939 Pact; the object was, as they thought, to "strengthen their position while deciding political questions with us". At this time the Russian troops were scattered, like the 28th Rifle corps (responsible for the Brest fortress and its area) with 9 rifle, 3 artillery and all engineer batallions at work on defences. Meanwhile, in the old, historic crennellated fortress of Brest, the Germans could see Soviet soldiers carrying out their routine drills, complete with band. Precisely what was passing on through Stalin's mind still remains something of a mystery, but on 21 June Stalin sensed greater danger. "Vozmozhno Napadenie Nemtzev", "The Germans might attack" was the cryptic words he used to set some precautionary moves. At 01:00 hours on 22 June the separate German Army commands transmitted their call-signs indicating full readiness. The officers were reading to their men the Fuhrer's personal order, "To the soldiers of the Ostfront". Obeying their own laws were the specialists of Regiment 800, the "Brandenburgers", many of them Russian-speaking, infiltrated - or dropped by parachute - behind Soviet lines. Dressed in Red Army uniform, the 800 men were making for Brest fortress or for the bridges over the Bug. A number of men, smuggled in on Saturday in goods trains or hidden under loads of gravel in rail trucks, had already been in the town of Brest for many hours. . .
Attacker: German (Infanterie Division 31 and 34, XII Armeekorps / Regiment 800, The Brandenburgers)
Defender: Russian (28th Rifle Corps) 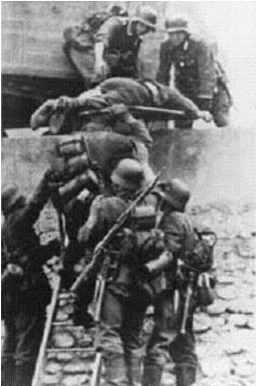