As night fell on the 26th, the dispirited 10th Highland Light Infantry gave up their attack on the hill to the south of Cheux, and settled down for the wet and miserable night ahead. Meanwhile, across the hill, Hauptsturmfuehrer Hans Siegel arrived with the last four Panzers of his company, and set about towing away the guns of Batterie 5 of SS Artellerie Regiment 12. Come morning, as the Highlanders prepared to renew their attack, Siegel positioned his tanks either side of the road that crossed the Salbey Stream. As the lead company of 10th HLI advanced over the crest, they were hit by a withering artillery barrage. Pressing forward, they came directly into the field of fire of Siegel's Panzers. The tanks fired only their machine guns, maintaining their concealment while saving their 75s for the inevitable British armor support.
Attacker: British (10th Battalion, The Highland Light Infantry and 7th Battalion, Royal Tank Regiment)
Defender: German (SS) (12th SS Panzer Division Hitler Jugend and KG Weidinger) 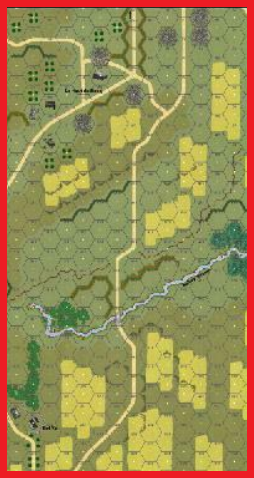