The British coup de main force had been on the ground for nearly an hour and a half. The capture of the bridges over the Orne River and Canal de Caen had been spectacularly successful. Lt. Fox’s platoon had arrived from the Orne River bridge to reinforce the three platoons which had seized the canal bridge. Major Howard deployed his company in a rough semi-circle around the western end of the canal bridge, with one platoon as far west as the road junction. As the ox and Bucks waited, the sounds of tank engines starting were heard coming from Le Port.
Attacker: German (Panzerpionier Kompanie 1, Infanterie Division 716/Armor of Panzerpionier Kompanie 1)
Defender: British (Companies B and D, 2nd Oxfordshire and Buckinghamshire Light Infantry) 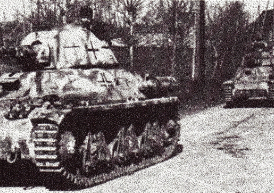